Butch Lord is a twenty year veteran stand-up comedian. He has been headlining comedy clubs across the country for nearly fifteen of those years. His stand-up shows are fast-paced and high energy as Butch takes the stage with a flurry of loud music, one-liners and short stories that grab an audience’s attention and never lets go! His hard, edgy look is quickly softened by his carefree and lighthearted view of himself and the world around him. His genuine enthusiasm for performing, and his obvious passion for making people laugh shine through brilliantly and endear him to even the most conservative audiences!

Although Butch has maintained a regular tour schedule for his stand-up comedy through the years, he managed to expand his arsenal by bringing his considerable talents to radio in the late nineties. By late 2001, Butch was a very popular member of a nationally syndicated morning radio show. That show was syndicated on more than 40 FM stations, but it was also on Sirius satellite radio. As satellite radio was relatively new and still finding its niche, Butch was as open to searching all its potentials and limitations as anyone. It was satellite’s most obvious advantage, the fact that a show can be heard anywhere in the country, that Butch focused his attentions on. He felt that it was  potentially as bad for radio as it was good because of what Butch felt was one of the biggest reasons people listen to radio at all… being able to talk with and actually see from time to time your favorite DJ or talk show host! Since satellite radio produces and broadcasts virtually all of their shows from a single location, New York for Sirius and Washington DC for XM, just how often would listeners across the country talk to, or for that matter, see, their favorite DJ’s and hosts!?! Not very often… never, really.

That dilemma led Butch to the concept of a touring radio show! A show that would be both national and local by touring nationally and interviewing locally! And that concept is the basis of Butch’s new radio show, The Butch Lord Radio Road Show! Butch takes his production crew with him as he tours comedy clubs across the country. As most comedy clubs have the comedians for one week, Butch spends his off time each week in search of LIVE LOCAL ORIGINAL music, LIVE LOCAL ORIGINAL comedy, and LIVE LOCAL ORIGINAL cool stuff (interesting people doing interesting things). The show has been extremely well received by several focus groups as well as with the regular listeners in the existing FM market of his flagship station, WQFX103.1 FM.

The advantages of having Butch at your club, college, or event are relatively obvious. Not only do you get a first-rate, world class professional comedian with a hilarious show that flat out rocks, but Butch brings his radio and online audiences with him when he comes to your city. And takes your customers and all of his new friends and fans with him when he leaves, entertaining them with new shows and adventures each week until he returns to your city with all those fans, listeners and customers in tow!

Another advantage of Butch’s show is the fact that all of the bands, comedians, venues and promoters Butch befriends through his radio show stay in touch and regularly get together to bring bigger and better shows to your city! Thus generating income that didn’t exist and expanding everyone’s customer and fan base!

I can’t make you funny. You bring the talent. What I can do is help you develop that talent by steering you into your strengths and away from your weaknesses. This workshop will teach you some basic universal skills that enhance your performances as well as your writing. Also, it’ll show you how to develop premises and format stories for the stage. Additionally, you’ll learn the basics of working clubs and booking yourself as a professional comedian.

Speak to individual comedians about their performances. Work with them to furtherdevelop their material. 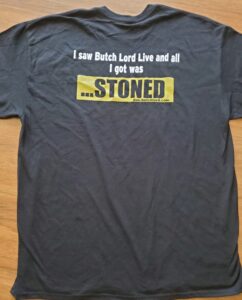 Have a question, comment, or want to book Butch for an upcoming show?

Just fill out the form below and he’ll get back to you shortly!